Yesterday was J and I’s 2nd anniversary and it’s been almost exactly 3 years since we began the ttc journey.  Here are the beautiful gifts he gave me on Sunday:

J can never wait until the day of to give me presents, lol.  Our first Christmas after we were married, he gave me half my presents before Christmas ever got here!  I gave him the Garth Brooks tickets even though I had to spoil the surprise a couple weeks early.  Last night, we went to a place called Shenanigans in La Crosse.  It’s a sports bar along with arcade games, laser tag, bumper cars, etc.  It was pretty dead in there and the food wasn’t great, but we had a good time competing in Connect 4 (I won), air hockey (he always wins), skee ball (we each won a round), and Pacman (I won).  If you’re counting, I came out on top, lol.  It was a fun night. 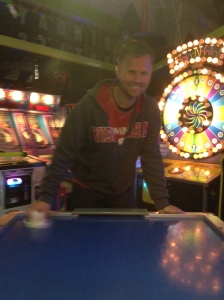 I also wanted to say a Huge “Thank You” to Ashley for my mug and package.  Her website or handle wasn’t included but hopefully she will see this!  I LOVE the Mug!!!!

9 thoughts on “2 Years and Mug Exchange”