How is Little Miss A 4 months old already?!  It’s gone by so quickly.  She turned 4 months old yesterday on my Daddy’s birthday.  The 6th birthday that we’ve had without him on this earth.  Anyways, on to her update:

Medical Issues:   We’ve been dealing with a gunky eye for over a week now.  She had her 4 month appt a week early because Dr. G was leaving on Maternity leave and it was already goopy but she said to just watch it and if it gets pink or starts matting shut to bring her back in.  Well, the last couple days she wakes up with it all matted up so I think we’re dealing with a bout of conjunctivitis.  The lavender oil worked the first time but when the symptoms disappeared, I forgot to continue using it so I’ll call the Dr. in the morning if she wakes up with it matted shut again.  Until then, I’ll be applying lavender oil every 15-30 min around her upper cheek bone, brow bone and bridge of nose.

Sleep:  Her morning naps are more cat nap like because I don’t have the monitor set up in her room yet and I don’t like having her upstairs napping while I’m downstairs with the daycare kids in the morning.  Sometimes, she’ll sleep in the rock and play, sometimes the swing and sometimes the lillebaby.  In the afternoon, I put her down in her crib when the daycare kids go down at 1pm.  I tuck her into the magic sleep suit, turn on the fan and she’s out within a couple minutes and usually sleeps between 3-4 hours.

Nighttime –  she eats her cereal in-between 8 and 9 (usually closer to 8pm), then we get jammies and her owlet monitor on, have another bottle between 2-3 oz and she’s usually asleep between 9:3-10pm.  She normally sleeps til between 7-8pm but has fussed at 3:30 and 5:30am a couple times this week.  One night she cuddled in with Daddy at 3:30am and the other time it just took a putting in the paci a few times but she eventually went back to sleep.

Clothing Size:  3-6 Months in most things.  It’s so sad!  I packed up most of her 0-3 mo. clothes only keeping out a few things like her good luck packer onesies that better damn well work today…it’s not looking so hot this first quarter.

Diet:  Up and Up Infant formula usually 3 oz bottles and rice cereal and fruit at night.  So far we’ve tried banana, applesauce, prunes, pears and peaches and she’s done well with all of them.  She has bottles anywhere between between 2 1/2-3 hours during the day with a long stretch without one during her afternoon nap and then closer to 2 hrs between them in the evening.

Baby Gear Love:  Lillebaby, rock and play and she is a big fan of her piano playmat!  She still loves, loves, loves her changing mat.  If she’s fussy, set her on there and you’ll get big smiles usually.  🙂

Milestones/Firsts:  We are getting much closer to outright laughs.  That neck is pretty solid now and she started sleeping through the night over Christmas vacation which is a beautiful thing!  We also think she has begun to teeth this last week.  Dr. G warned me it’d be coming and she’s just fussier than normal.  Luckily diluted Thieves rubbed on her gums calms her right down.  No fever or anything just extra fussy, starting to drool and constantly chewing on her fists if she doesn’t have her paci in.

Dislikes:  Tummy time…she absolutely despises it, getting out of the bath, having to wait for her cereal to get made.

Things I Don’t Want to Forget:  That huge smile, the start of those giggles, how much she loves to cuddle, that she does this cute little lip smack when she finishes a bottle.

What’s Next?  I hoping some out right giggles and belly laughs, rolling over and learning to like tummy time a bit more.  Also, hopefully she’ll start to get more interested in her toys.

How’s Mommy doing?  As far as Annabelle is concerned, I’m doing great.  I absolutely love being her Mom and I was away from her for 12 hours yesterday for the first time and it was torture.  When it comes to our newest foster placements, it’s another thing and I’m starting to feel a little selfish sometimes on at times, wishing we hadn’t taken fostering back on so soon.  I feel horrible even thinking that much less writing it when there’s so many kids that need fostering.  These kids are just way more challenging than L ever was so sometimes, it’s just exhausting.

How’s Daddy doing?  I think he too sometimes wishes we hadn’t taken on fostering right now.  He’s busy coaching 7th grade girls basketball right now so we don’t get to see him as much as we’d like.  We haven’t had a date night in forever either which is difficult now that the older kids are here.

Pics from the last month: 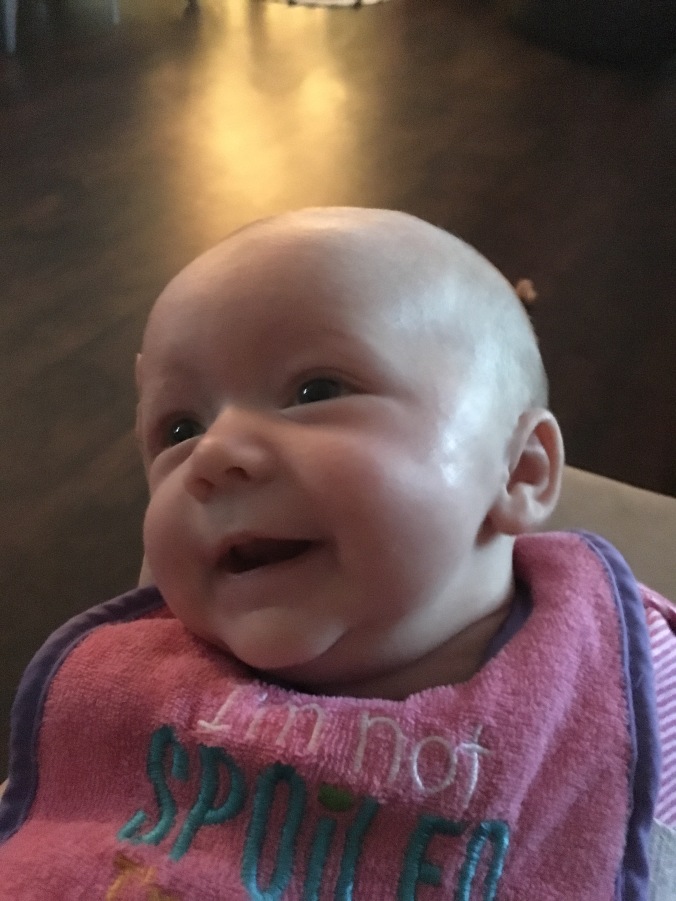 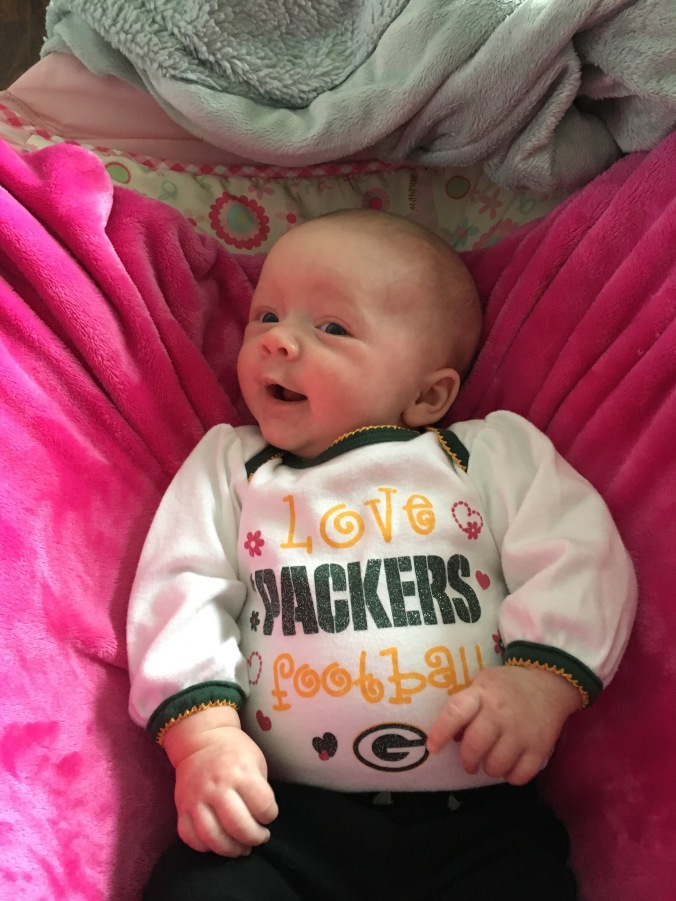 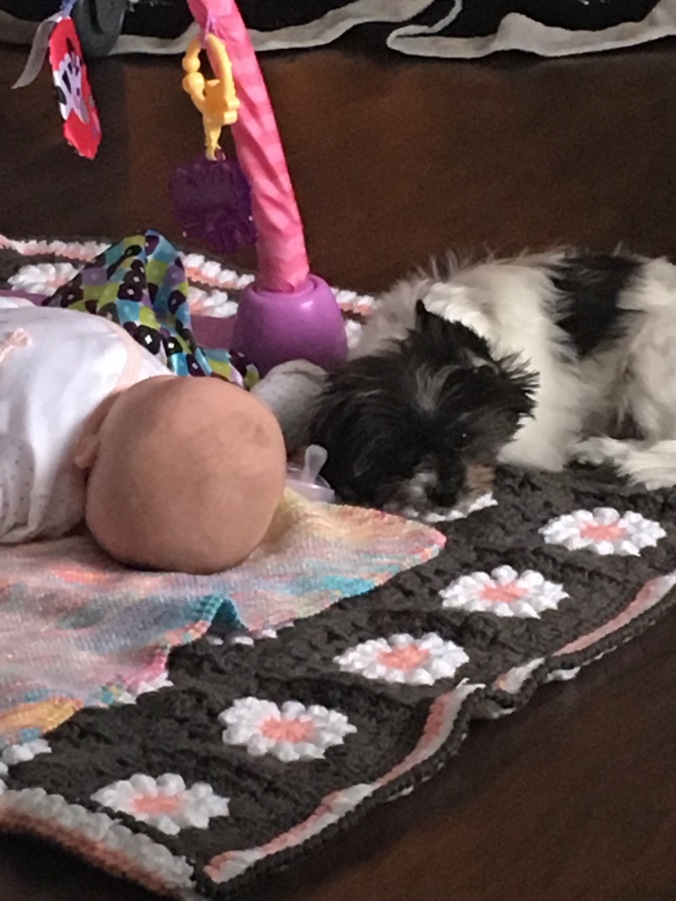 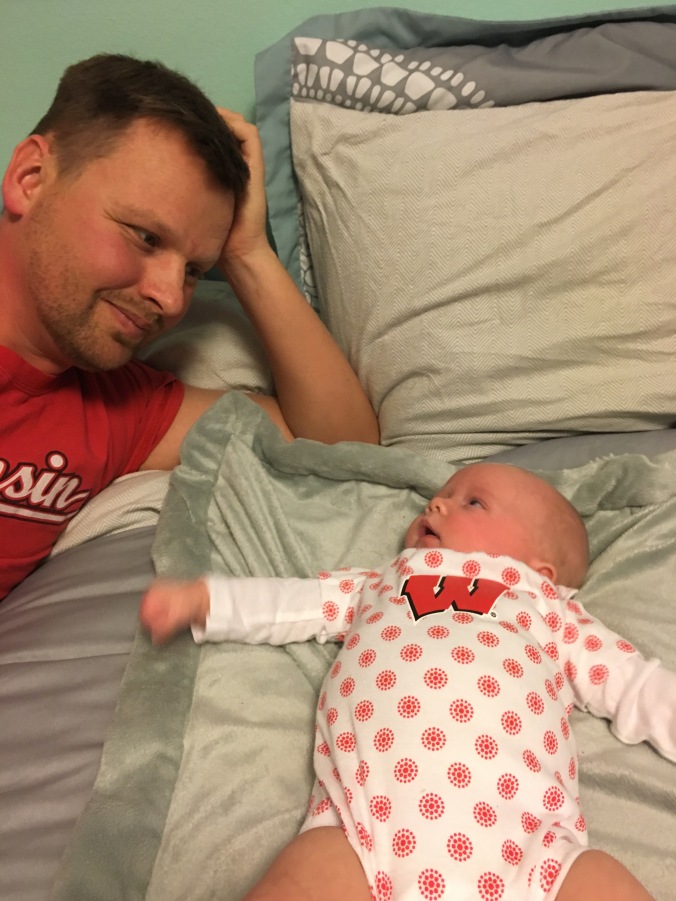 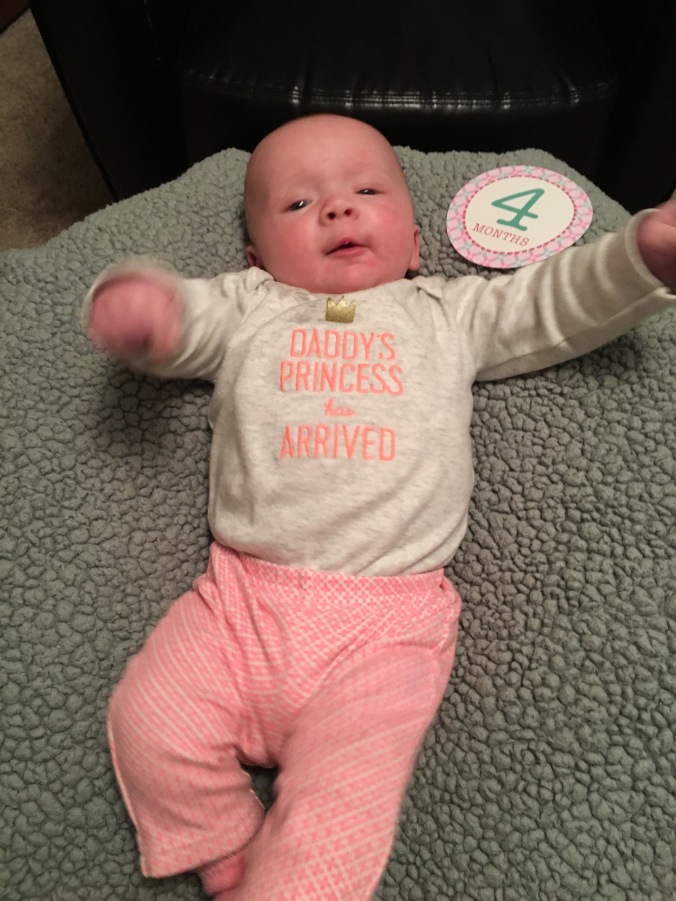 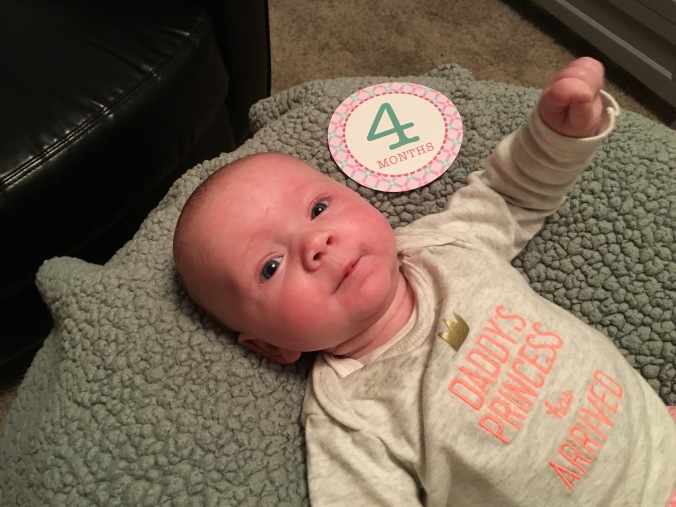 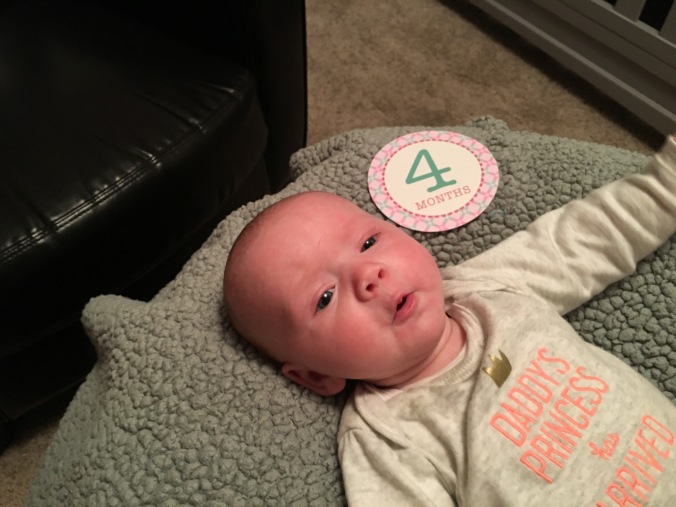