I don’t remember the last time this happened!

Friday evening I went for a walk with a woman that is becoming a dear friend to me.  We met because of a marriage conference at our Church.  We were sitting right in front of her and her husband and they had about a week old baby with them.  People kept coming up to talk them (we’re fairly new to our Church and it is huge so we don’t know many people there yet) and I heard her say something about a birth Mom.  I didn’t want to be rude and turn around and ask her so I just kind of nudged J.  He knew who her husband was because they had played in the same men’s basketball league although not on the same team.  A week or two later, we went to a meeting because they were starting marriage groups to go with the conference that we had just gone too.  It turned out that they were going to be the leaders for one of the groups in our town so we went over and started talking to them.  They have also been through infertility and have adopted all 3 of their children through the same adoption agency.  That’s how we got hooked up with the one that we will use if we get led to that step.  Anyways, it was just great to walk and talk and hear about how she feels now that she’s on the other side of it (she still doesn’t like to go to baby showers).  She lent me a book called “Hannah’s Hope”.  I haven’t gotten very far in it but I will do a book review when I get it finished.

Saturday morning, J was up and getting things done fairly early.  I was laying in bed watching “The Biggest Loser” and in the middle of it, I jumped out of bed and went and told J I want him to start training me at least 3 days a week.  He is a phy ed and health teacher and also a coach so he knows plenty.  He said, “well, go get changed, we’ll start right now.”  And I spent the rest of the morning hauling and stacking wood.  🙂  Saturday afternoon we spent out on the Mississippi River enjoying one of the last few times, if the not the last time we get on the boat this year.  Saturday evening, Justin’s cousin and his family came over and we grilled out and went to the Village Park to watch “Frozen”.  Unfortunately, we ended up getting rained out but they just came back here and we hung out for quite a while.

Sunday morning, again J was up early (I hate that because I’m a light sleeper and then I get woke up, lol).  He asked my plans for the day and I said I was going to do some changing up in the living room which ultimately led to him doing a project for me.  I made Chili for lunch, we watched the 1st half of the Packer game and I fell asleep for the 2nd half which was probably a good thing or there would have been a lot of yelling, I’m sure.  Then J headed out to hunt and I actually got started on my living room project.  Here’s some before and after pics: 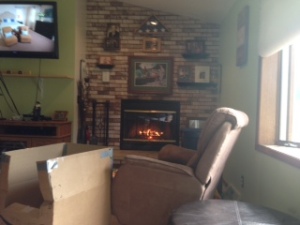 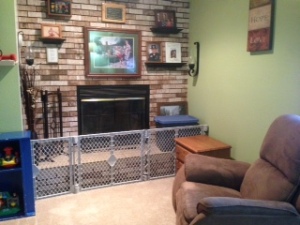 The kiddos have officially taken over the living room!!  Oh, and I’ve totally jinxed myself on the fact that they sleep in the same room and at the same time.  Yeah, no….they now think when I put them in their cribs for nap…it’s social hour!!!  And I mean hour…I already had to move one crib out and this afternoon I had to pull another kiddo out of there because the other 2 were finally sleeping and I didn’t want her to wake them up.  Thank God I have a regular size crib set up in my office that I could put her in.  I need to find some partitions to put in there so they can’t see each other but man are they expensive!!!  Hope you all have a great week!

A Family Defined by Love, not DNA<br>Our Story of Infertility, Fostering and Adoption

The joy in small things