Nov. 9, 2010 ~ J and I finally meet at a Pizza Hut right in-between the 2 towns we live in.  We had been emailing back and forth through Match.com for a month or 2 and finally found time to meet up for dinner on a Tuesday night.

June 2011 ~ We took our first vacation together out to CT to visit the family I nannied for.  Over a romantic dinner at one of my favorite restaurants we talked marriage and family.

October 2011 ~ We went for a long weekend in Door County, WI and started our TTC journey.  We weren’t married yet but I was worried about infertility even back then (I just had a feeling it was going to be difficult for me to get pregnant) and wanted to get going due to my age.

April 2012 ~ I go into my OBGYN for a pap smear and she said she will refer us to an RE when we’re ready.

Aug. 1st, 2012 ~ J proprosed over a dinner of White chicken chili at his Sister’s house.  This was right after we got home from a 2 and half week road trip down the East Coast where he had his choice of many romantic and memorable places to proprose.  He said it was too expected and he didn’t want me to expect it….trust me, I didn’t expect it that Monday night at his Sister’s, lol.

Nov. 3, 2012 ~ We were married in a little church where J grew up and we had the reception in my hometown.  It was a beautiful ceremony where we wrote our own vows.  We had a few snowflakes and some beautiful sunshine that day.  When we went to take pictures at the Veterans Memorial in my hometown where we have a tile for my Dad, the Sun came out at this exact moment when our photographer snapped this pic: 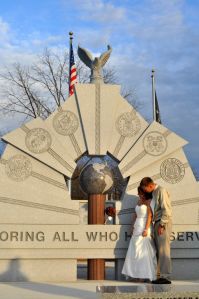 My Dad’s pic is in a heart frame hanging from my bouquet.  It was an Amazing Day!

We also are able to sign up for health insurance through J’s work now that we are married!

Dec. 27th, 2012 ~ We have our first appt with an RE.  We go over my history and J does SA.  Everything is great with him.  Wants us to try for 3 more months naturally and schedules HSG for me.

Feb. 2013 ~ Get HSG done…painful!!!  Tubes are clear but he does find polyps/fibroids.  Fibroid is embedded in uterus and would be a pretty big surgery to get it out.  He doesn’t think the polyp is big enough to cause any problems.  Also find out I have cervical stenosis (very tiny cervical opening…makes IUI’s very painful for me and about impossible for sperm to get through during intercourse).  CM is also non existent.  Both of these things are more than likely due to have pre-cancerous cells removed from my cervix in 2001.

Take the rest of the summer off due to RE’s vacations/summer schedule.

Fall 2013 ~ Close my daycare in my hometown and re-open where J and I are now living.  Slow start as I work on getting kids + no money for fertility treatments!

April 2014 ~ Meet with new clinic that has proven success rate with IVF if we go that route.  Very happy with everyone we’ve worked with through there, do IUI #2, letrezole at highest dosage (I think 7.5mg) cd 3-9, again only 1 collie, J’s SC was really good, again, don’t remember numbers…should really write this stuff down.  Maybe it’s in one of my posts, lol.  BFN.

May 2014 ~ IUI #3, letrezole cd 3-7 and follistim cd 5-7, get 2 follies, J has another great sample, BFN.  They’ve also noticed at this point that what looks like a cyst on my right ovary from the first IUI I did with them has not gone away.  Want to do another ultrasound, worried about endometrioisis.

June 6th, 2014 ~ Go in for laparoscopy.  What she thought would be stage 2 or 3 endometriosis turns out to be stage 4.  Gets everything cleaned out.

August 2014 ~ IUI #4, letrezole was messing with my lining so we go to straight injectables.  Follistim 75 iu’s cd 3-7, only have 1 follie but it’s ready to go way earlier than normal, trigger and IUI…J’s best counts yet!!!  BFN…so disappointed!